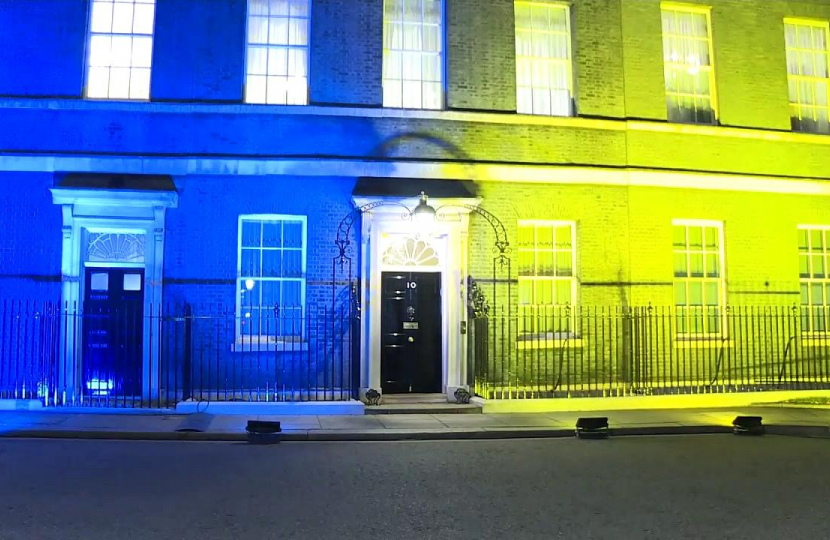 On the 24th March, The Prime Minister and Foreign Secretary met with NATO and G7 leaders to announce further support for Ukraine in their fight against Russia.

In his address to the Conference, the PM stated;

Today, I have announced we in the UK will send an additional 6,000 missiles and provide £25 million in unrestricted funding for Ukraine’s armed forces, more than doubling the lethal aid we have provided to date.

We are bolstering our support for the NATO countries on the frontline, sending a new deployment of UK troops to Bulgaria on top of the doubling our troops both in Poland and in Estonia.

NATO and G7 leaders were also united today in our determination to continue turning the screws on the Kremlin’s war machine, including by weaning ourselves off Russian oil and gas and reshaping global energy security.

The UK has already hit over 1,000 Russian individuals and entities in our toughest-ever sanctions, and the Foreign Secretary has announced 65 new sanctions against Russian banks, weapons manufacturers and oligarchs just this morning."

The situation that we are witnessing playing out in Ukraine is terrible, heart-wrenching, and a decisive moment in World Politics that may define future generations. Many constituents are writing to me with increasing alarm and I fully share these concerns. I take the view that the Russian attack on Ukraine seems an unprovoked an anti-democratic act of aggression. Although I will look to update this page regularly, it should not be used as a source for live updates, given how fast-moving the situation is likely to be. With intense sadness, at the time of writing, I sense that it is more than likely that the Government will need to react accordingly to changing circumstances in Ukraine, and I ask that you keep up to date with the normal political channels where you get your news.

My perspective about Ukraine

I am appalled about what is happening in Ukraine. The scenes playing out to us are nothing more than a human tragedy; a tragedy that I thought have been consigned to history, but now playing out in my lifetime. I am possibly of the final generation who had living grandparents who remembered the Second World War, and I benefited from their recollections about the dreadful impact of War. I live in hope that the Russian President may come to understand the futility of his actions seeking to intervene in a sovereign democratic state, but I support the UK Government’s laser-like focus to work with our international friends to ‘right the wrongs’ that we have seen since the end of February. Ignoring the destructive circumstances that we are all facing is not an option for us in the UK. Whilst I accept that this a grave moment in international geo-political history, I believe that the UK has the moral duty to respond to these horrific acts, which are not only an attack on democracy and freedom in Eastern Europe but the very principles of the UN Charter.

My Representations and Interventions about Ukraine

There have been many occasions during my time as your MP when I have been in the Commons at moment of acute epochal moments in UK history, and I welcomed the opportunity to be in the Chamber on Thursday 24 February when the Prime Minister announced Russia’s invasion and notified the House of the UK’s initial tranche of sanctions. Clearly, I am not the only parliamentarian who will wish to raise queries, and constituent points about the Invasion of Ukraine as well as UK policy in this area, but I will seek to raise points as appropriate:

You will be aware of several announcements from Government during the last couple of weeks and I have supported the UK Government’s work in this area in lockstep with allies.

I was pleased to note the UK Government’s announcement this week of a full asset freeze and travel ban on seven of Russia’s wealthiest and most influential oligarchs. Roman Abramovich is the figure that has captured most of the headlines to date, in part due to his links with Chelsea FC. His net worth is estimated to be £9.4 billion.

The other six figures are:

The UK Government’s other measures include:

I also strongly welcome the establishment of the Global Anti-Corruption sanctions regime which will enable the Government to target corrupt actors and their enablers. This new tool will prevent those responsible from entering the UK or laundering assets here. These sanctions will help to ensure that the UK is not a safe haven for those involved in serious corruption, including those who profit from it.

I also welcome that the Government is bringing forward the Economic Crime Bill and measures to create a register of beneficial ownership for property. I will obviously be monitoring the Bill when it comes to the Chamber, to ensure that the rubric of the Bill has the effect that we are hoping for.

The House debated the Economic Crime Bill on 7 March and it was an important debate about a critical issue. I was shocked by the statistics that Fraud is now one of the most common crimes in the UK, with one in fifteen people falling victim a year. There were 3.8 million fraud offences in England and Wales in 2019 alone, with fraud accounting for almost one third of all crime experienced by individuals. The Home Office estimates that the social and economic cost of fraud to individuals in England and Wales is £4.7 billion per year, and the social and economic cost of organised fraud against businesses and the public sector in the UK is £5.9 billion.

The publication of the Economic Crime Plan in 2019 laid the groundwork for a broad strategy to combat financial crime, from money laundering to online VAT fraud.

Significant progress has already been made in creating the necessary institutions to carry out this strategy, including the National Economic Crime Centre, the Government Counter Fraud Profession, the Office for Professional Body Anti-Money Laundering Supervision, and public-private initiatives such as the Joint Money Laundering Intelligence Taskforce and the Joint Fraud Taskforce. I also welcome the £100 million investment in a Taxpayer Protection Taskforce of 1,265 HMRC staff to combat fraud within Covid-19 support packages, including the CJRS and SEISS.

Moreover, I am encouraged by plans to upgrade Companies House’s systems, cracking down on money laundering and fraud in UK registered companies while allowing legitimate businesses to flourish.

(4.3.2022) I have been pleased that the UK has led a group of 38 countries to make a state party referral enabling the Prosecutor to proceed straight to an investigation without the need for judicial approval. I am also advised that as a founder member of the International Criminal Court, the UK is willing to provide the necessary technical assistance to support successful convictions.

I am minded that any Russian leader or officer carrying out orders that amount to war crimes face ending up in the court dock and ultimately in prison, but I note that the critical task now is to preserve properly all evidence of war crimes.

(11.3.2022) The UK Government announced that the UK will phase out the import of Russian oil and oil products by the end of this year. Find out more here: https://www.gov.uk/government/news/uk-to-phase-out-russian-oil-imports.

The Government will support businesses through a new Taskforce on Oil to support them to make use of this period in finding alternative supplies. The Prime Minister has also been clear that we must move away from the little dependence we have on Russian hydrocarbon. However, this must be done step by step working with our European partners. I welcome that the Prime Minister will announce an Energy Supply Strategy in due course which will address how the Government will meet the needs of the UK in the short, medium, and long term.

I also note a large amount of commentary about the UK gas market. The UK gas market is one of the most liquid and developed in the world and provides security through diversity of supply. Most of the gas supply to the UK comes from domestic production and imports from reliable suppliers like Norway. There are no gas pipelines directly linking the UK with Russia. Although we receive some Liquefied Natural Gas from Russia, we are in no way dependent – less than four per cent was sourced from Russia in 2020. While this is a small proportion of our supply, I know that the Government is exploring options to end this altogether.  I will monitor progress accordingly.

So much of the media coverage is understandably focuses on the desperate situation facing those fleeing Ukraine, and I am acutely troubled at the sight of families splitting away with women and children travelling into the unknown with little idea about their futures. I am heartened by the generosity of so many people in the UK and other countries to do what they can to help. I am also aware of important endeavour from bodies such as our local Councils in this field, and I will be speaking further with leaders as we move forward, but I also look to Government to do what they can in the face of this undoubted unfolding humanitarian tragedy.

Please visit the following weblink for rolling commentary and up to date information: https://homeofficemedia.blog.gov.uk/2022/02/25/home-office-action-on-ukraine/

The Home Secretary announced yet further support for Ukrainian refugees during her speech on Thursday 10 March 2022. This issue continues to develop but the key facts are:

I also understand Home Office set up a dedicated helpline on 0300 3032785 for anyone who is intending to apply under the Family Migration route to assist with making an application. This is operating on a 24/7 basis.

I am mindful of parliamentary protocol, meaning that I can only explore cases with a connect to Bosworth, and there are limitations regarding my potential involvement in considering immigration cases in line with proper processes. However, if you are aware of an ongoing immigration case with a connection between Ukraine and Bosworth with links to a Bosworth constituent, which you wish me to chase further with the Home Office, please email me at luke.evans.mp@parliament.uk. Details of the connection to Bosworth would need to be made clear in the initial email.  I am working through some cases meeting that criterion and I am happy to appropriately assist where I can.

This important scheme allows people seeking sanctuary with no family ties to the UK to be sponsored by individuals or organisations who can offer them a home such as a spare room or unoccupied residential self-contained unit. The key details are as follows:

I am also advised that the Government will be supporting local authorities with a substantial level of funding at a rate of £10,500 per person to local authorities, with an additional top-up for child education, to enable them to provide support to families to rebuild their lives and fully integrate into communities.

Please do consider donating to the Disasters Emergency Committee’s Ukraine Humanitarian Appeal. I have been pleased that the UK Government will match pound-for-pound the public’s first £20 million and look to increase over time. I am advised that at this time, it is worthwhile for funds to be raised then for donations to be made in kind.

Many of us remain acutely disturbed by the plight of the Ukrainian refugees and I am pleased that the Government is playing a key role to provide finance and logistics. The following measures may be of interest:

The Government is strongly advising people looking to help to donate cash through trusted charities and aid organisations rather than donating goods, with cash being able to be transferred quickly to areas where needed.

If you would still like to take forward a donation of goods you may wish to contact a charity or organising body based in the country where you intend to donate to establish what is needed and how to deliver it before you begin to collect goods.