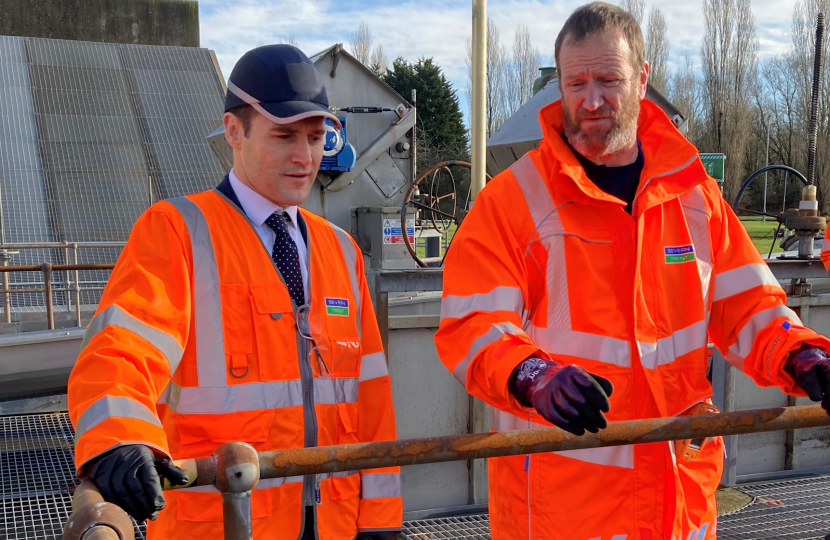 As part of the Environment Act 2021, the Government intends to produce a Storm Overflow Discharge Reduction Plan by September 2022 to tackle the issue of sewage discharges, and are asking for the public's views.

The people of Bosworth have rightly raised their concerns regarding the ecological and public health harm from storm overflows. I strongly encourage constituents to have their say as this is an opportunity to influence the largest programme to tackle storm sewage discharges in history.

You can have your say here: https://consult.defra.gov.uk/water-industry/storm-overflows-discharge-reduction-plan/

The consultation closes 12th May.

Thank you for those who have got in contact on this issue, and I start from the position that I do not need convincing as to the importance of ensuring clean and healthy rivers, I have seen the effects in my clinical experience as a doctor.

I must admit, I have been frustrated by the way this debate has transpired and the nature of how this has been portrayed by some areas of the media.

Nonetheless, I am pleased with the latest updates on water quality:

Results have found that 99% of bathing waters in England have passed water quality standards following testing of over 400 designated sites carried out by the Environment Agency – the highest number since new standards were introduced in 2015.

I understand many constituents remain concerned about pollution going into our rivers, and work continues as the Environment Act recently became law creating legally binding requirements on water companies, but I am pleased that progress is being made.

With the additional £4.3 billion received in the latest Spending Review by the Department for Environment, Food and Rural Affairs, I am pleased the Environment Agency is now monitoring 80% of storm overflows which will increase to 100% in 2023.

After major investigations suggesting that some water companies may not be complying with permits, the Environment Agency has brought 48 prosecutions since 2015, including a record £90 million fine for Southern Water company in July 2021.

I have been in useful dialogue with Severn Trent Water and the Environment Agency about this issue. Most recently, I was pleased to visit and meet with representatives from Severn Trent at a water processing plant in Hinckley to find out more about their crucial work to manage our water supply. I was pleased to hear about the sites new plans, including £25 million of investment to improve water quality in the areas nearby, and plans to boost biodiversity.

Severn Trent as a whole delivers almost 2 billion litres of water every day and maintains 92,000km of sewer pipes, with the Hinckley site serving 45,000 residents.  I am pleased they have been awarded the top 4* rating by the Environment Agency for environmental performance and will be investing £1.5 billion on environmental initiatives including the Great Big Nature Boost.

Government work in this area

In July this year, the Government set out its expectation that OFWAT should incentivise water companies to invest with the view to significantly reduce the use of storm overflows in the forthcoming pricing review period. OFWAT will be required to act in accordance with this expectation. This policy position will be an additional clause in the Environment Bill to underline the action the government is taking.

I also think that it is important to fully note that the landmark Environment Act 2021 includes:

There was a lot of debate in recent months regarding specific amendments within the Environment Bill, now passed into law, and I believe it would be remiss of me to not clarify the Government's position on this.

I think that politicians from both sides of the house are keen to listen and make change so I have been pleased that the Government will write what was already government policy into law to give people the necessary reassurance.

A lot of the miscommunication is around the amendment and what was proposed. This is technical but I have put the direct context here from the debate so you can see what was said. In essence, only part of amendment 45 from the lords was excepted, with lines 7-14 omitted. Why? Because there was no costed or practical plan on how to deliver the changes.

To explain a little further.

In responding to a question regarding how much cost would be added to the consumers’ water bills, DEFRA Minister Rebecca Pow explained:

"As an approximate estimate, to get rid of or eliminate storm sewage overflows would cost between—these are very wide figures—£150 billion and £660 billion. One must consider the cost of bills, because there will be an impact on those.”

The Minister further explains the reasoning for not supporting the Lords amendment;

“I am outlining what we have put into the Bill since it was last here to demonstrate how we will be reducing the harm from these sewage storm overflows. The cumulative impact of all this will be to actually address the issue that we all so want to address. Crucially, we will have sewerage management plans in which water companies will have to explain and detail how they are going to be delivering a resilient sewerage system. We expect those plans to include considered actions for reducing storm overflows and their harm in line with the ambition set out in the Bill.”

Further still, the Government is working outside the scope of the Bill, notably with the water regulator Ofwat expecting it to “incentivise water companies to significantly reduce the frequency and volume of sewage discharges from storm overflows.” As part of this, the Minister explains that “for the first time ever, we have put at the top of the agenda that it will have to get the water companies to address storm sewage overflows.”

You can read the full debate here.

It is therefore self-evident that the problem is about having a funded realistic plan to deal with our Victorian aged sewage system. I do not doubt the Government’s stance about the following:

Further to this, as alluded to in the Hansard exchange, there are measures being put in place outside the scope of this bill.