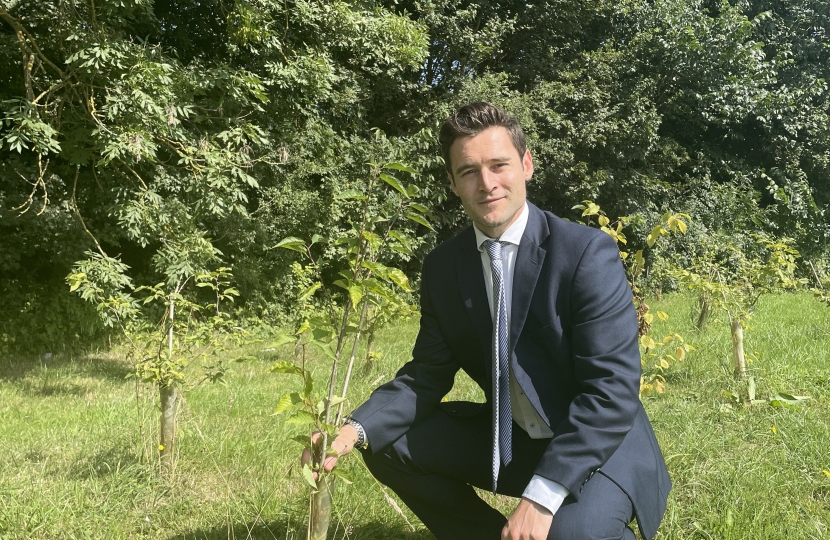 MP for Bosworth, Dr Luke Evans, has launched a campaign to protect Burbage Common from the proposed National Rail Freight Interchange adjacent to Hinckley, following resident’s concerns that traffic and wildlife will be adversely affected if plans for the interchange are approved.

If the plans are successful, the Rail Freight Interchange will be built just off the M69, with the potential to significantly impact much-loved local wildlife habitat, Burbage Common. The completed Interchange would include Industrial and storage/distribution units, a rail port and lorry park, dedicated road access directly from Junction 2 of the M69 and associated highway works, as well as landscaping including footpath and cycle links.

Although the grounds where the Common is situated would remain, local residents have raised concerns that if the plans were successful, local traffic, wildlife and the environment would all be affected. Dr Luke met local community group Save Burbage Common in previous months, and joined fellow Leicestershire MP Alberto Costa at a parish council meeting in October to discuss the Interchange plans, and the impact on the local area.

An eight-week public consultation on the National Rail Freight Interchange is due to open on the 12 January, and Dr Luke is urging all residents to take part and have their say. It is of critical importance that people register their thoughts on the development, as this is one of the most important ways of influencing what happens. Taking part in the consultation is an important way to formally share your views with developer, the Planning Inspectorate and the Borough Council, and this can be done at: www.hinckleynrfi.co.uk.

The Bosworth MP is running a survey to hear your views as part of his campaign, with 13,000 households to be contacted locally in the coming month to take part. The MP is also running an online survey for local people to have their say, which can be found on Dr Luke’s website: www.drlukeevans.org.uk.

As the Interchange is considered a proposal of national significance, a formal application will be made by Tritax Symmetry to the Secretary of State for a Development Consent Order through the Infrastructure Planning Unit, which is administered through the Planning Inspectorate.

Dr Luke said: “The proposals for the National Rail Freight Interchange have the potential to adversely affect our much-loved beauty spot Burbage Common, so I’m launching a campaign to help protect it. Residents near the Common have raised concerns about traffic, wildlife and the environment, if the Interchange were to be built.”

“I would strongly encourage people to help support my campaign by having their say and completing my survey online. When the public consultation opens, I’d also encourage people to take part online over the next few weeks, to formally share their views with the developer, the Planning Inspectorate and the Council. You can find more information on how to complete my survey, and the public consultation, on my website: www.drlukeevans.org.uk.”