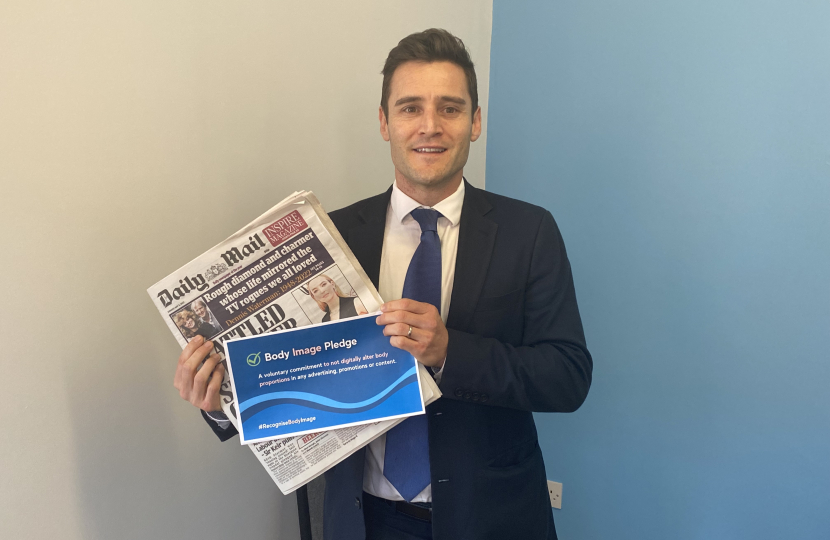 Over 80 MPs have now signed an open letter to brands, charities and organisations asking them to sign the Body Image Pledge, which urges companies to voluntarily commit to not digitally manipulate a person's body image.

Cross-party MPs - representing every end of the political spectrum - have called for companies to stop digitally 'fixing' another person's body, showing just how important an issue this is.

“When the name of photo-editing software becomes a verb with a negative connotation, we know that as a society we need to correct things. Digitally manipulating body proportions to fit someone else’s ideal has become normalised, creating a warped sense of reality, to the point that it is damaging the mental health of children and adults.

I am calling for brands, charities and organisations to voluntarily commit to not digitally manipulate the body proportions of a person who appears in any of their direct imagery. This is about honesty, transparency and ensuring we aren’t creating unrealistic and unachievable standards for not only ourselves but future generations too.

In my role as a GP before becoming an MP, I saw first-hand the negative effects that social media platforms and false advertising can have on a person’s relationship with their body. Since starting my #RecogniseBodyImage campaign many more people and organisations have come forward with concerns.

I have been glad to see so much cross party support from my colleagues in Parliament on this important issue. Over 60 MPs from six different parties – covering every end of the political spectrum – have signed my letter urging more organisations to stop the harmful practice of digitally ‘fixing’ someone’s body shape.

MPs who you would never expect to see named alongside each other have given their support, which proves just how significant an issue this is. The time for industry action is now.

National businesses and organisations like Dove, Boots, Barry-M and most recently PureGym have made this commitment, with some taking this approach for many years now. I hope this call from fellow Parliamentarians will raise awareness and cause other companies to follow suit.”