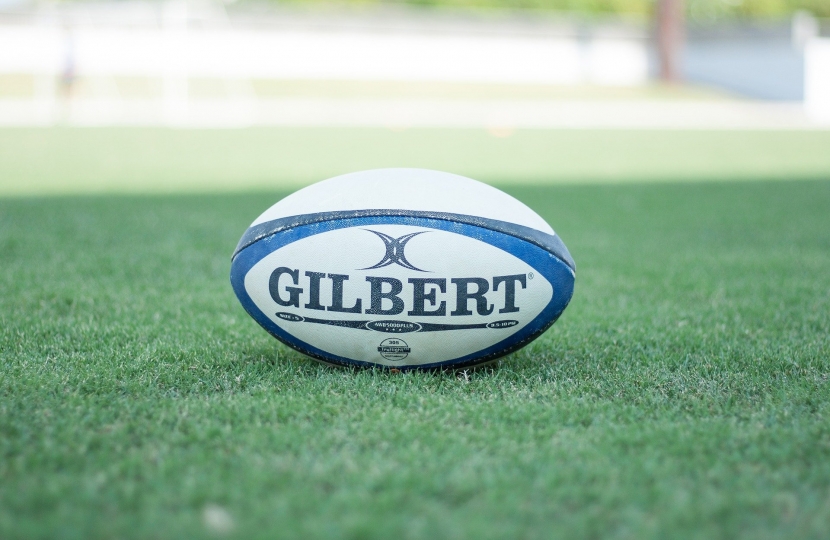 Dr Luke Evans, the Member of Parliament for Bosworth - and a proud Bath Rugby supporter – has welcomed news announced today of £135 million being invested in rugby union as part of a Sports Winter Survival Package for major spectator sports in England.

Dr Luke has previously lobbied Sports Minister Nigel Huddleston to provide a package of support to the rugby union – both for the elite and amateur game - as they endeavour to meet financial commitments whilst at the same time playing behind closed doors as a result of coronavirus or, in a worst case scenario, facing the potential threat of a second sporting lockdown.

The £135 million support package will see funding of £59 million being provided to Premiership Rugby, with £9 million allocated to Championship clubs and a further £23 million to clubs outside of the professional game. £44 million has been allocated to the Rugby Football Union.

Dr Luke said “Rugby Union is an historic game and friendly rivalries run deep. I love seeing Tigers being turned over at The Rec, but as a club Leicester forms an integral part of our sporting heritage and I have had hundreds of fans contact me as their MP to help support Tigers. I’m very happy to do so.

“I’m delighted that today’s announcement will not only help secure the future of Tigers, and other Premiership rugby clubs like Wasps, Northampton, and indeed Bath, during these difficult times.

“But more than that, the wider part of the funding will help clubs like Hinckley continue to cultivate players who then go on to play at the highest level feeding clubs, professional clubs and even England. It is such great news that this player pipeline is closer to being maintained.”

Today’s announcement for rugby union represents nearly half of a £300 million package for professional sport which will also see funding made available for horse racing, women’s football and the lower tiers of the National League. Rugby league, motorsport, tennis, netball, basketball, ice hockey, badminton and greyhound racing are also in line to benefit.

Dr Luke added “There’s nothing quite like being at a premiership grudge match, and I can’t wait to be at Welford Road in my Bath shirt enjoying a win hopefully in the not too distant future! But all joking aside Tigers and their supporters play a massive part in making Rugby Union the wonderful game that it is. It’s vital that Government continues to help preserve its history and support the present so rugby can go come back stronger in the future.”