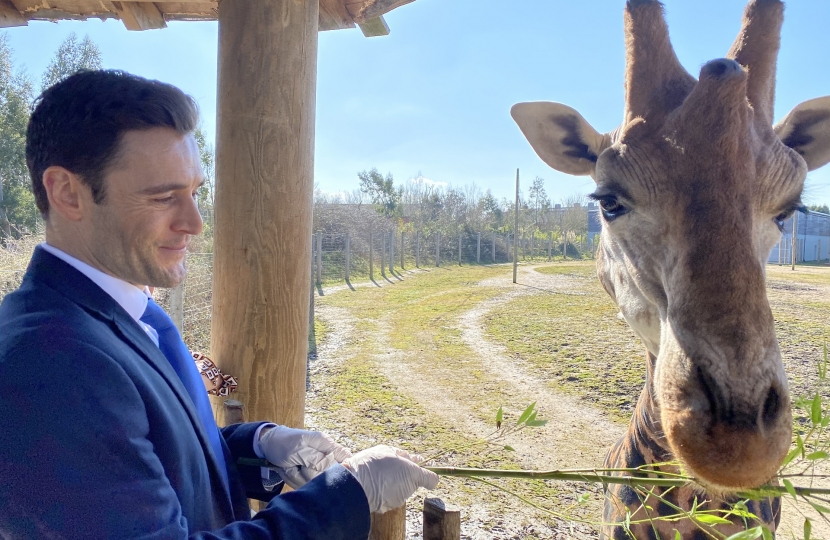 Dr Luke Evans, the Member of Parliament for Bosworth, has joined forces with 15 other parliamentarians to demand that Government takes urgent action to protect Twycross Zoo, and other large charity zoos around the country.

The MPs and Peers have written to the Prime Minister, Boris Johnson, urging him to release funds which will provide meaningful support to zoos from a £100 million pound fund, which due to design flaws has substantially remained unclaimed.

Dr Evans said: “To claim financial support from the Government zoos have to be at imminent risk of going under. The Government’s £100 million Zoo Animals Fund is well meaning but has stood largely untouched because thankfully many have not got to the point of planning for closure yet, only 5 out of 300 zoos, aquariums and safari parks have been able to claim.

“Unfortunately by the time zoos like Twycross are planning for closure irreversible damage will have already been done.”

Restrictive eligibility criteria, specifically that zoos must be down to their last 12 weeks of reserves before receiving a grant from the scheme, means the fund has effectively excluded the vast majority from applying. This criterion has been widely recognised as deeply inappropriate for zoos and aquariums. Most zoos would already be taking steps to close having reached 12 weeks, as it takes months if not years to find and move some of the world’s most incredible animals to suitable homes.

Dr Evans added: “Twycross Zoo is a charity globally respected and locally beloved for its primate conservation programme. We can’t get to a state where it is just weeks from closure before providing support. The animals and amazing scientists who look after them need the Government to step in now.”

Andrew Rosindell MP, chair of the All Party Parliamentary Group for Zoos and Aquariums commented: “We are in an astonishing place where a £100m support fund has been established and yet zoos that need help cannot access this money. This fund is inadequate and flawed. The Government has been told this for months. We should not have had to get to this position. It is imperative the Prime Minister steps in.

“We are facing an extinction crisis and need zoos like never before. The Prime Minister should join me and see for himself why this important work needs to be supported by the funding Government is apparently happy to spend.”

The open letter from members of the APPG for Zoos and Aquariums can be seen below.

Are you interested in growing your business?
Would you like to find new international customers?
Do you know about the support available to help your business identify and take advantage of exporting opportunities?