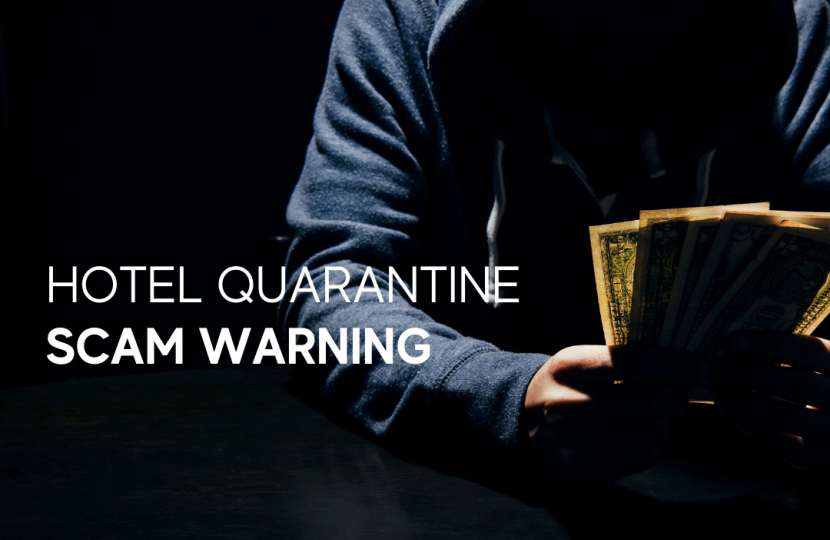 Upon further investigation, however, those working on the case began to suspect that the story was suspicious. The United States is currently on the amber list (as opposed to the red list), which means that the constituent’s partner could quarantine at home for 10 days, rather than in a hotel. The constituent was only communicating with his partner via an online chat service, and it was established that the constituent had sadly fallen victim to a new scam, and the partner was not who they said they were.

The matter has now been reported to Leicestershire Police, and Dr Luke would like to make sure that nobody else falls victim to the scam, or other types of online fraud.

Dr Luke has been concerned about fraud throughout the pandemic, most recently alerting the Justice Minister, Robert Buckland, to the issue in the House of Commons. After meeting commercial bank TSB and discovering that over 50% of scams and fraud were directly involved with social media, Dr Evans asked the Minister what the government were doing to combat the issue. In response, Robert Buckland recognised that the government “need to do more to increase our capacity and capability to tackle this issue, to which we are all, including me, Mr Speaker, subject.” Dr Luke will continue to press the government for further action to protect us all from fraudulent activity.

Dr Evans said: “Unfortunately during the pandemic fraudulent online activity has risen, with UK police forces reporting that £34.5 million has been stolen in over 6000 Covid-19 specific scams since March 2020. We should all be mindful that those online are not necessarily who they say they are, and everyone is at risk from being a victim of fraud, whether they are shopping, banking or dating online. Fraudulent activity is becoming increasingly sophisticated, and it is important that we all remain vigilant. The constituent in this case came close to losing a sizeable amount of money, and I am glad we were able to prevent that from happening.”

Graeme Biggar, Director General of the National Economic Crime Centre, said: “Criminals are exploiting the COVID-19 pandemic to scam people in a variety of ways and this is only likely to increase. We need individuals and businesses to be fully aware and prepared. There is a wealth of advice available from dedicated counter fraud professionals, but in general you should always think very carefully before you hand over your money or your personal details. If you think you have fallen for a scam, contact your bank immediately and please report to Action Fraud.”

Suspicious activity or incidents can be reported to Action Fraud through the website or by phoning 0300 123 2040. By making Action Fraud aware of any scams that you have encountered, and making friends and family aware, you can help to prevent criminal activity online.

Dr Luke Evans, MP for Bosworth, has thanked Battling Brook Primary School in Hinckley for inviting him to their ‘Thank You NHS Day’ on Friday 2 July. Dr Luke was delighted to meet Headteacher Stewart Marsden, the pupils of Battling Brook, and Year 6 pupil Myla, who originally had the idea for the