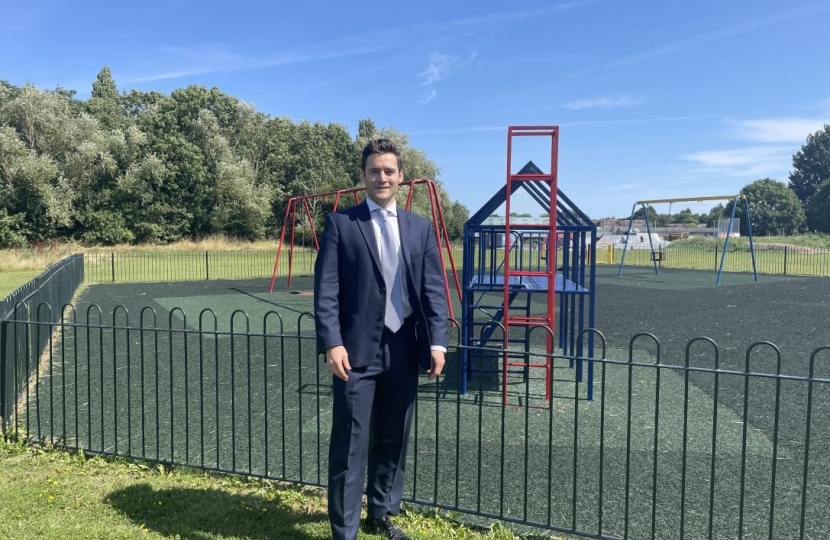 Dr Luke Evans, MP for Bosworth, has thanked the Hinckley NCS (National Citizenship Service) Group for all of their fantastic work on their social action project in Barwell. The group have been working hard to make a real difference in the community, and Dr Luke has been to Barwell to see their project, and thanked them for everything they have been doing in a video message.

The Hinckley NCS are a group of young people working to benefit the local community, helping them to develop important life and career skills for the future. NCS was launched by the Government in 2011, with more than 500,000 young people having taken part since. The scheme is designed to help 16 and 17 year-olds develop skills to assist them in the future. For the first part of their social action project, the Hinckley NCS group re-painted the play park in Barwell skate park in the last week of July. They then held a fundraiser in the skatepark for local charity Poors Platt, who help to support vulnerable people, raising an impressive £170.

For the final part of their project, the group put together a video highlighting their fantastic work in and around Barwell, showing off everything the Barwell community has to offer. The group also engaged with local residents and featured their views in their video.

Dr Luke has visited the newly-painted play park to see the group’s hard work, and recorded a special video message to thank the group for their efforts.

Dr Luke said: “I was so pleased to hear about all the brilliant work which the Hinckley NCS group have been doing in Barwell. The play park looks fantastic now it’s been re-painted, and to be able to raise £170 for Poors Platt is a great achievement. I have watched the video the group put together myself, and it’s lovely reflection of the community spirit in Barwell. The whole group are real assets to the community, a huge well done to them!”

You can view Dr Luke’s message at www.facebook.com/drlukeevansmp

This week marked a return to Parliament for the start of the 'new term', and it was great to see Parliament moving back to some form of normality after 18 months.