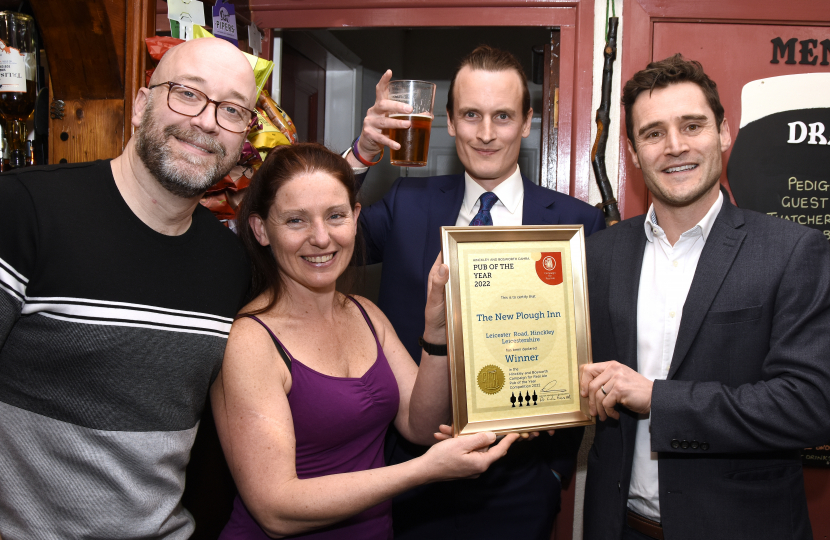 Dr Luke Evans, MP for Bosworth, presented Hinckley’s New Plough Inn with the Pub of the Year 2022 award on behalf of the Hinckley and Bosworth CAMRA branch.

Surrounded by friends and frequent customers of the popular watering hole, Dr Luke presented the well-deserved award to Louise and Darren Lavender, who have run the pub for 13 years. The duo are no strangers to awards, nor hard work. The New Plough Inn has won Pub of the Year three times since 2011 and the Lavender’s were given a 10 Years’ Service award in 2019. On top of this Darren took on a local brewery in 2016 and Louise ran Hinckley Carnival for five years.

It’s not the large array of gins nor rotating guest ales on tap, however, which the pub is best known for. On the last Thursday of each month the New Plough Inn host a charity quiz night for important local causes and national charities. Through their tireless dedication to fundraising, the New Plough Inn and its team have raised over £100,000. During lockdowns the quizzes went virtual, the pub quickly adapted and began a take-away food and drink service keeping spirits high for the people of Hinckley and Bosworth.

Dr Luke Evans said “A community pub is so important, and never more so than after the last couple of years when it’s been taken away from us due to the pandemic. So, it was wonderful to go down to the New Plough Inn, present this very well deserved award and speak to some of the regulars. While it is clear how much the pub and its owners mean to local people, their support and loyalty has meant that Louise, Darren and the staff have been able to bounce back and are continuing with their inspiring fundraising for local charities.

“The effects of the pandemic may unfortunately be felt for many years by those in the hospitality sector, but with the support of our community Louise and Darren are back doing what they do best. I wish them all the best for the future and I’m sure it won’t be long before they’re celebrating another award – I only wonder where they’ll fit it on the walls!”

Louise and Darren Lavender said “What shocked us the most is that it’s only been 10 years since we last won the award. For it to come back to us is quite amazing – there’s a lot of stiff competition out there at the moment! Coming out of the pandemic we didn’t know what business would be like, but we’ve seen a lot of new people come to the pub and thankfully they’ve continued drinking with us. We’re so grateful to everyone who stops in for a pint or takes part in a quiz and to CAMRA for their continued support.”

"If you're interested in joining CAMRA or are already a member and would like to attend our events, visit hinckleyandbosworth.camra.org.uk. Our next branch meeting is at the Rising Sun, Shackerstone at 7:30pm on June 6th."