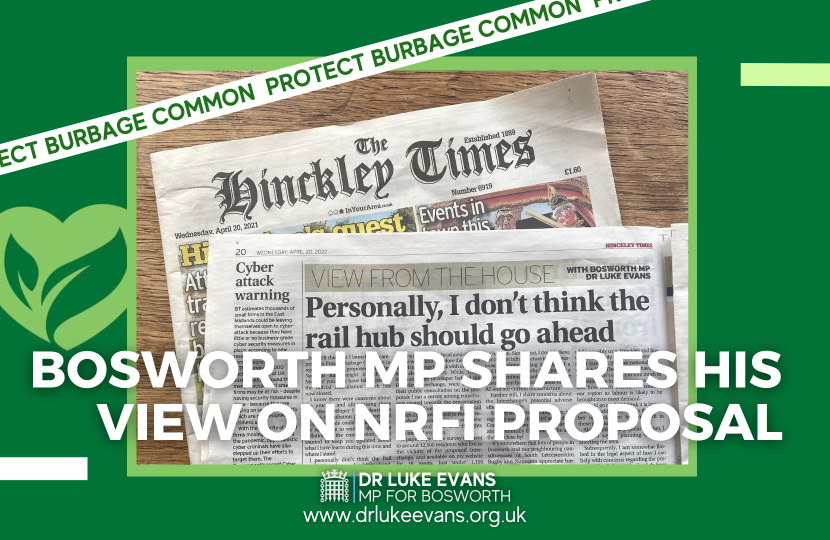 Every month I write a column for the Hinckley Times. This month I wanted to update constituents on the Hinckley NRFI and be clear on my thoughts on the proposal.

You can read my column below, or - better yet - pick up a copy of the paper!

Earlier this year I launched a campaign to Protect Burbage Common in response to the proposed Hinckley National Rail Freight Interchange. Many of you may have taken part in the official consultation which has now closed. I know there were concerns about the process, and after raising these with the developer I was pleased to see the consultation period extended so more locals could have their say. We now have to wait for the official collation of the consultation, but I wanted to keep you updated about what I have learnt during this time and where I stand.

I personally don’t think the Rail Freight Interchange should go ahead. While it may help us nationally reach net zero, I am concerned by the overwhelming impact it will have on our roads and infrastructure and our local environment. There are further complications with the rail line outside of our constituency, and not to mention the fact that the East Midlands Freeport has been given the greenlight.

The Freeport is wonderful news for us all as it will bring 60,000 jobs and green investment to our region. Coincidently, it proposes to have a rail freight interchange within one of its three sites. This leads to the question: why do we need another just down the road in Hinckley?

There were a multitude of things that prompted me to launch my Protect Burbage Common campaign. No one wants to see our local area change for the worse and therefore the NRFI is one of the things I speak with constituents about the most. While Tritax Symmetry, the developer behind the Hinckley Interchange, were running their public consultation on the proposals I ran a survey among constituents geared towards the preservation of Burbage Common. Before I detail the results, I just wanted to thank everybody who took the time to complete the survey and share their thoughts with me and my team.

A paper copy of the survey was sent to around 12,500 residents who live in the vicinity of the proposed Interchange, and available on my website for 10 weeks. Just under 1,100 responses were received and the overwhelming majority (96%, equating to 1,049 respondents) stated they are against the proposals. The same number believe the Interchange would have a detrimental impact on the area with residents citing their biggest concerns being the environmental impact and burden on local infrastructure.

I asked for respondents to note down some thoughts about the proposals. Tellingly, some of the most used words were ‘traffic’, ‘pollution’, ‘impact’ and ‘wildlife’. Concerns were also raised regarding the additional strain that the Interchange would place on the M69 and the A5. The latter is already under a lot of pressure and is another local issue I am working hard on. Simply put, I don’t believe our current infrastructure is fit for purpose, let alone adding the idea of a Rail Freight. This is why I am putting a lot of attention towards lobbying the Government for improvements for the A5 and our current infrastructure. 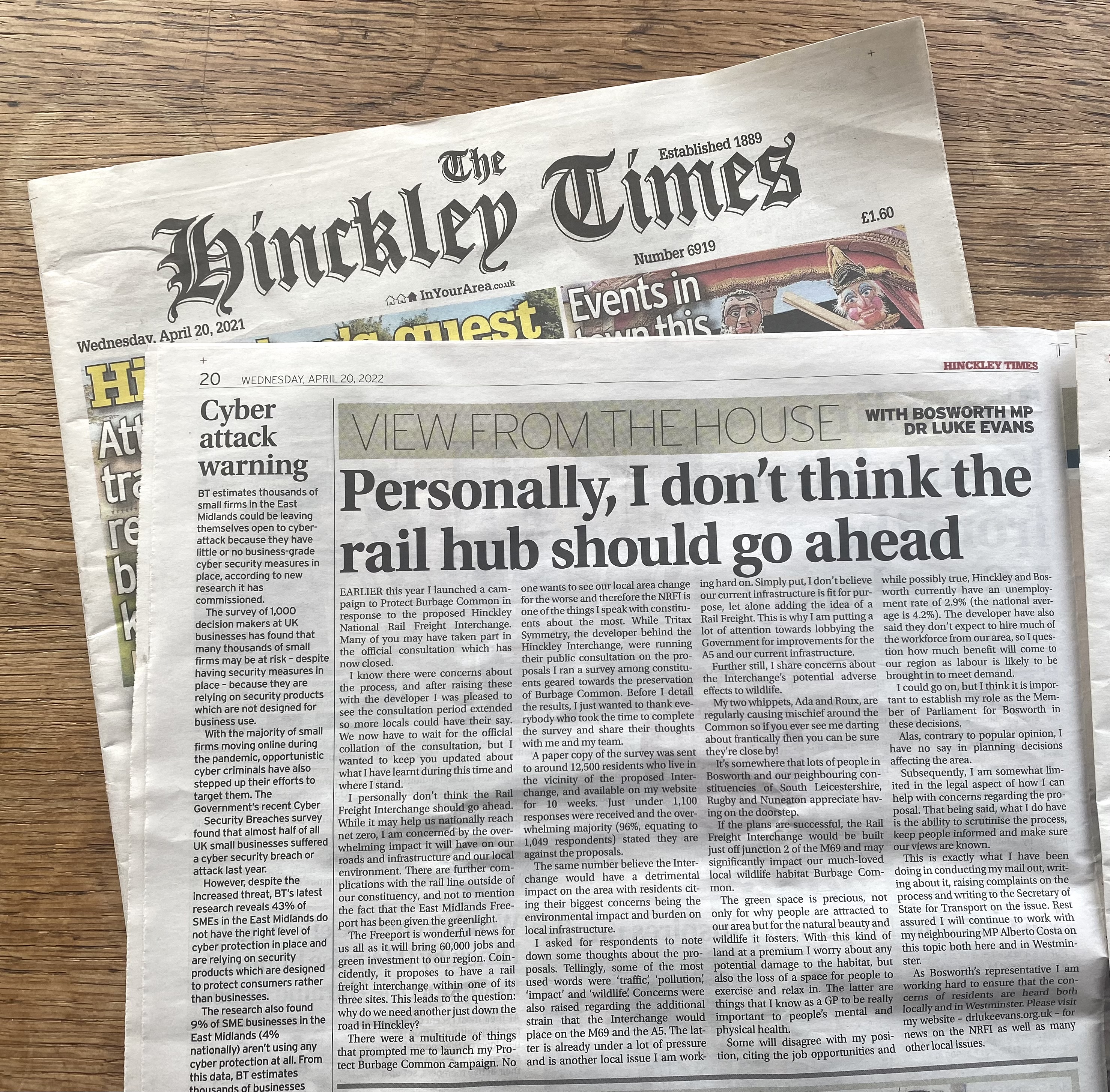 Further still, I share concerns about the Interchange’s potential adverse effects to wildlife. My two whippets, Ada and Roux, are regularly causing mischief around the Common so if you ever see me darting about frantically then you can be sure they’re close by! It’s somewhere that lots of people in Bosworth and our neighbouring constituencies of South Leicestershire, Rugby and Nuneaton appreciate having on the doorstep. If the plans are successful, the Rail Freight Interchange would be built just off junction 2 of the M69 and may significantly impact our much-loved local wildlife habitat Burbage Common.

The green space is precious, not only for why people are attracted to our area but for the natural beauty and wildlife it fosters. With this kind of land at a premium I worry about any potential damage to the habitat, but also the loss of a space for people to exercise and relax in. The latter are things that I know as a GP to be really important to people’s mental and physical health.

Some will disagree with my position, citing the job opportunities and while possibly true, Hinckley and Bosworth currently have an unemployment rate of 2.9% (the national average is 4.2%). The developer have also said they don’t expect to hire much of the workforce from our area, so I question how much benefit will come to our region as labour is likely to be brought in to meet demand.

I could go on, but I think it is important to establish my role as the Member of Parliament for Bosworth in these decisions. Alas, contrary to popular opinion, I have no say in planning decisions affecting the area. Subsequently, I am somewhat limited in the legal aspect of how I can help with concerns regarding the proposal. That being said, what I do have is the ability to scrutinise the process, keep people informed and make sure our views are known. This is exactly what I have been doing in conducting my mail out, writing about it, raising complaints on the process and writing to the Secretary of State for Transport on the issue. Rest assured I will continue to work with my neighbouring MP Alberto Costa on this topic both here and in Westminster.

As Bosworth’s representative I am working hard to ensure that the concerns of residents are heard both locally and in Westminster. Please visit my website – drlukeevans.org.uk – for news on the NRFI as well as many other local issues.