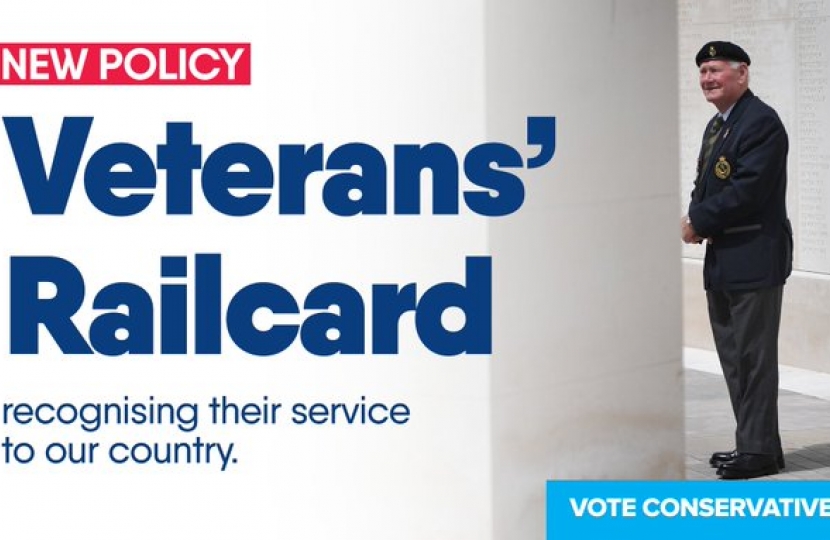 Up to 700,000 veterans who are not covered by existing rail cards will be able to receive the discount. The move announced today will build on the Conservatives’ commitment to supporting veterans and recognising their service to the country.

Eligibility will be extended to all those who have served in the Armed Forces, as well as their spouses and dependent children travelling with the railcard holder. This will allow many veterans, and their families, to save hundreds of pounds every year.

This latest show of recognition comes after the Government’s establishment of the first ever Office for Veterans’ Affairs, ensuring that dedicated ministers in the Cabinet Office ensure that the Government delivers the life-long support that veterans deserve.

What you need to know:

We will extend the eligibility of the existing HM Forces' Railcard to all those who have previously served in the Armed Forces.

‍Eligibility would be determined by the new Veterans’ ID Card being rolled out from this year. Spouses and dependent children will be able to travel at a discount with the railcard holder.‍

The HM Forces' Railcard costs £21 a year and allows one-third off most rail tickets.

It will save users substantial sums e.g. nearly £38 on an off-peak return from Leeds to London.‍

Any veteran will be able to buy the card, but it is mainly aimed at veterans who do not already qualify for the Senior or Disabled Persons' Railcards.‍

Of the 2.3m veterans in Britain, between 1.6m and 1.7m already qualify for the Senior Railcard or the Disabled Persons' Railcard.‍

We are supporting our veterans by setting up the first ever Office for Veterans’ Affairs.

‍This is the first time that veterans’ affairs will be overseen by dedicated ministers in the Cabinet Office to ensure the whole of government pulls together to deliver the life-long support our veterans deserve.‍

We have launched the first ever UK wide Veterans Strategy.‍

The Strategy outlines a new vision and principles to support those who served, in areas including community and relationships, employment and skills, health and wellbeing, finance and debt, housing, and contact with the law.

Last weekend saw the lifting of many of the lockdown restrictions that we have being living under for the past three and half months. For the first time our pubs, restaurants and hairdressers opened.