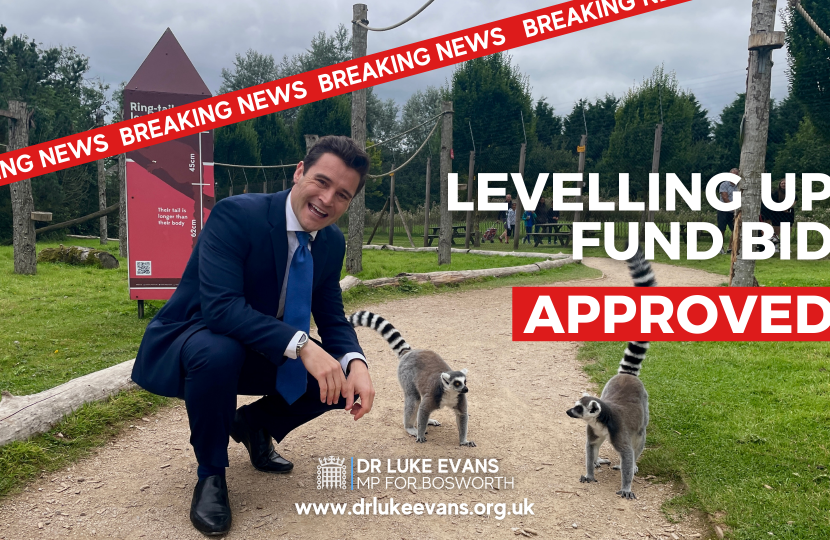 In the Autumn Budget, the Government have today (27 October) announced that Twycross Zoo’s bid for the Levelling Up Fund, which was formally recommended by Bosworth MP Dr Luke Evans, has been successful. As a result, Twycross Zoo will receive £19.9 million of funding for its new National Science and Conservation Centre, with a fantastic range of benefits for our local economy.

Earlier this year, each MP had the opportunity to formally recommend one project in their constituency to bid for investment from the Government’s Levelling Up Fund, and Dr Luke was delighted to support Twycross Zoo and their project for a new National Science and Conservation Centre. The Levelling Up Fund was launched to offer investment in local infrastructure, to have a visible, tangible impact on people and places, and support economic recovery. Dr Luke’s recommendation of the project was supported in addition by the Midlands Engine, the Local Economic Partnership, the Borough Council and the County Council.

Reacting to the news, Dr Luke said: “I am absolutely thrilled that my recommendation of Twycross Zoo’s project for a National Science and Conservation Centre has been successful, what fantastic news! As a result, £19.9 million of funding from the Government is heading to our area, and the centre is going to be a real hub for research, development and conservation – not just locally, but nationally and internationally in addition!”

“This investment will help to build on the fantastic work already done at Twycross Zoo, with real, tangible, benefits for our local economy. A huge congratulations to everyone at Twycross, having worked with the team there since being elected, I know that they will be absolutely thrilled by this news. I’m extremely proud that our area is continuing to strengthen its reputation as the place to invest, from Twycross Zoo, to the Midlands Engine and Green Growth, to all the work being done at MIRA!”

The creation of the proposed 3,365sqm purpose-built centre located adjacent to Twycross Zoo will offer researchers from around the world the opportunity to study the 4 Great Apes, plus over 100 endangered species, in naturalistic complex environments. The centre will also support conservationists and scientists with a world class facility for helping to tackle the environmental and ecological challenges we are facing over coming decades.

Since the submission of the bid in June, Dr Luke has raised the project several times in Parliament, helping to keep the project firmly at the top of the agenda. In September, describing how the creation of a centre would be a 'world-leading scientific, education and conservation centre driving tourism and the local economy’, Dr Luke invited the Chancellor, Rishi Sunak, to come and visit the Zoo. This month, the prospect of a National Science and Conservation Centre was raised again in Parliament by Dr Luke, inviting the new Minister for Levelling Up, Michael Gove, to come and see the great work being done at Twycross Zoo.

Dr Sharon Redrobe OBE, Chief Executive of Twycross Zoo, said: "We joined forces with Dr Luke, our local MP, and HBBC to submit a bid to the Government's #LevellingUpFund to create a National Science and Conservation Centre here at Twycross, putting our region at the heart of science and conservation, and to fight the global extinction crisis."

"The need to address these issues has never been more urgent, and with this new centre, we will be able to establish a national focus on protecting animals from extinction and create the conservationists of the future. I am absolutely delighted to hear the news, and was so pleased that we were able to bring together the Midlands Universities to create high skilled jobs, investment, and increased tourism to our area. By working together, we can make a real difference!"

You can find out more about the work done at Twycross Zoo, and more information about the planned National Science and Conservation Centre, here: www.twycrosszoo.org