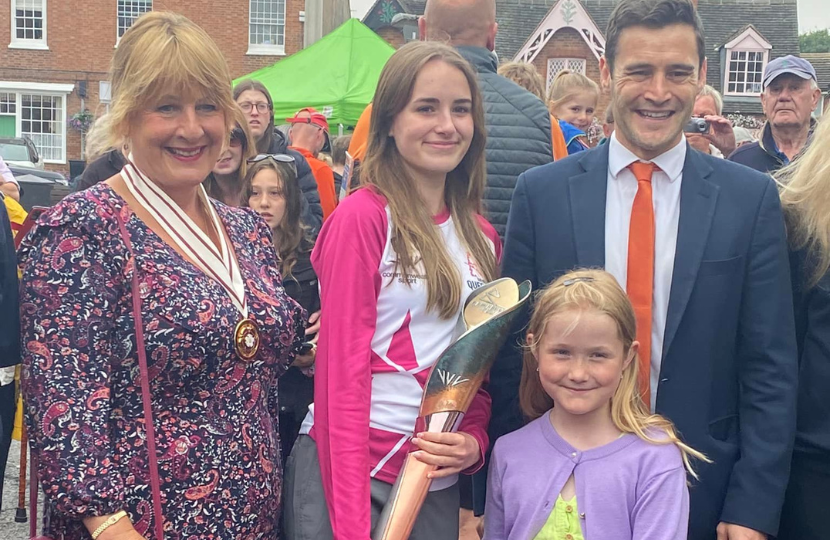 The Queen’s Baton Relay passed through Market Bosworth on Thursday July 21st as part of a 294-day journey around Commonwealth nations before the start of the Commonwealth Games on July 28th.

After a campaign by the MP for Bosworth, Dr Luke Evans, for the Baton to visit our area, members of the community lined the streets in Market Bosworth as the Baton passed through.

Last year Dr Luke started his campaign for Bosworth to play host to the Baton when the Member of Parliament met with Sports Minister Nigel Huddleston. Following this, Dr Luke wrote to the Minister from the Department for Digital, Culture, Media and Sport (DCMS) and the Commonwealth Games to continue making the case for our local area.

The Baton started visiting cities, towns and villages around England on July 4th. The Relay is a tradition that celebrates and connects communities from across the Commonwealth on the lead up to the event.

The Relay began in October 2021, after Her Majesty Queen Elizabeth II placed a message into the Baton ahead of its journey. When the Games start on July 28th the Baton will have travelled approximately 90,000 miles across all 72 nations and territories in the Commonwealth, including Europe, Africa, Asia, the Caribbean and the Americas.

Dr Luke Evans MP said “It was really great to see so many people come out to watch the Queen’s Baton Relay pass through Market Bosworth! I had applied for the Baton to pass through our area and am so pleased out of 650 constituencies, ours was one of the successful ones.

“With less than week to go before the start of Commonwealth Games in Birmingham, it was a wonderful opportunity for the community to come together and celebrate our area’s involvement in something special.

“I hope that seeing the Baton and watching the Games encourages people of all ages to get involved in sports – maybe we have a future gold medallist in Bosworth!”