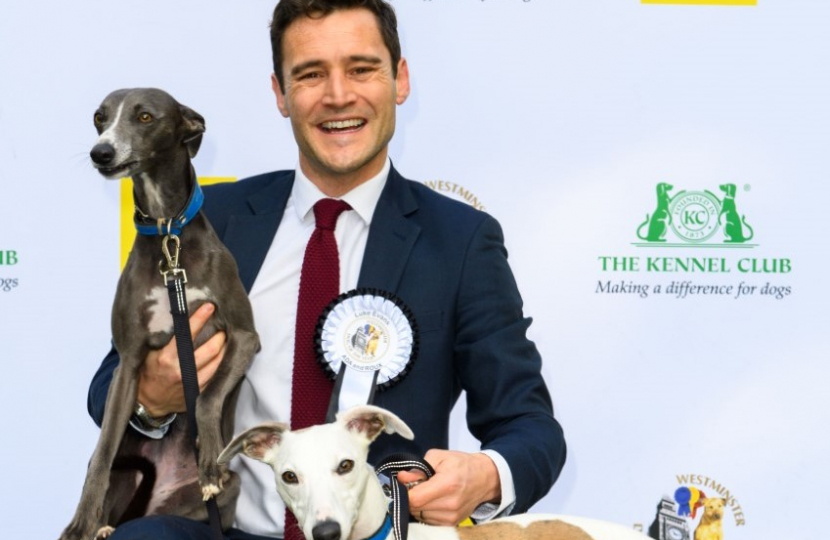 There is no doubt that we are a nation of animal lovers. I personally have lived around animals my whole life and I am now the proud owner of two mischievous and adorable whippets.

It therefore may come as no surprise that since becoming the MP for Bosworth in 2019, I have campaigned relentlessly for stronger protections for our beloved pets and harsher punishments for those who seek to do harm. I have continually promoted animal welfare, whether within our fields or our homes, and lobbied the Government to strengthen animal rights.

Here you can find an overview of some of the work I have been doing on this issue and the Government’s subsequent response:

I became aware of the spike in demand, price of puppies and thus pet theft during the pandemic when I sought to acquire my two Whippets, only 6 months apart the prices had risen nearly 200%.

After joining forces with Dogs Trust, the UK’s largest dog welfare charity, and specifically asking the Government to consider the merits of establishing a national task force to tackle pet theft, I greatly welcomed the announcement of a Pet Theft Taskforce.

You can find out more here: https://bit.ly/3rylTdF

You can find out more here: https://bit.ly/3sqwqXG

Raising the minimum age would allow more thorough and accurate checks of the age of the puppy to ensure they are not removed from their mother prematurely. I understand this was a specific ask from the Dogs Trust when I campaigned as part of their Parliamentary Puppy Smuggling Taskforce. You can find out more here: https://bit.ly/3oABCHp

If you are considering buying a puppy, you can find useful advice on buying responsibly on the Dogs Trust website: www.dogstrust.org.uk

This is part of wider Government work on animal welfare which I will continue to support:

Many constituents have also contacted me about including cats within the Kept Animals Bill to include restrictions on commercial and non-commercial movement, similar to that of puppy's as mentioned above.

I am aware that the Government's eight-week consultation on the movement of pets into Great Britain did not include proposals to include as thankfully there is limited evidence of a significant illegal trade in cats or significant numbers of low welfare movements.

I understand that the estimate of 70,000 cats detailed in the Cats Protection’s ‘Cats and Their Stats’ report appears to be based on an estimate of the number of cats obtained between March 2020 and March 2021 and the proportion of individuals that reported in a survey that they had sourced a pet from abroad during the same period. I am aware that official Government statistics show that between March 2020 and March 2021, 27,601 cats entered the UK under the non-commercial rules and 8,511 cats entered under commercial rules.

Overall, it would appear that the number of movements of cats into Great Britain is much lower than for dogs and fortunately, there is not significant evidence to suggest there are the same issues with young kittens and pregnant cats being imported. In 2020, for example, no pregnant cats and only 17 kittens (under the age of 15 weeks) were seized and detained.

Nonetheless, I understand constituent concern and I am pleased the Government have introduced compulsory cat microchipping by 20 weeks of age, helping to reunite lost or stolen pets with their owners. While 74 per cent of cats are already microchipped, it is estimated 2.8 million are unchipped. It is hugely important that cats are microchipped as this is often the only hope owners have of seeing a lost cat returned safely to their home. In addition, Ministers will review the operation of the current microchip database systems with a view to introducing improvements.

You can find out more here: Cat microchipping to be made mandatory - GOV.UK (www.gov.uk)

I have been continually raising these key topics in Parliament and I am pleased Government is taking strong action.

I understand there is still work to do to make the process of buying a pet safer, to stop criminals exploiting market demand and to improve and maintain animal welfare, from farm and field and within the home.

I will continue to provide a voice for our adored pets, treasured zoo’s and valued farms.

As a final note, I would like to reassure constituents that there has been no change in legislation and that the ban on using animals for the testing of finished cosmetic products remains in force.

However, I am advised that animal research still plays a role in providing vital safety information for potential new medicines and improving our understanding of how biological systems work in health and disease. Further, I am assured that animals, including dogs, are only used in research when there are no suitable alternatives, and any tests are carried out under controls that keep suffering to a minimum. This is known as the last-resort principle, which has been retained and strengthened in the new Environment Act.

I am opposed to animal tests where alternative approaches could be used.

I am pleased the Government is actively supporting and funding the development of alternatives to animals in science through the National Centre for the Replacement, Refinement and Reduction of Animals in Research—NC3Rs—which works nationally and internationally to drive the uptake of technologies and to ensure that advances are reflected in policy, practice and regulations on animal research.