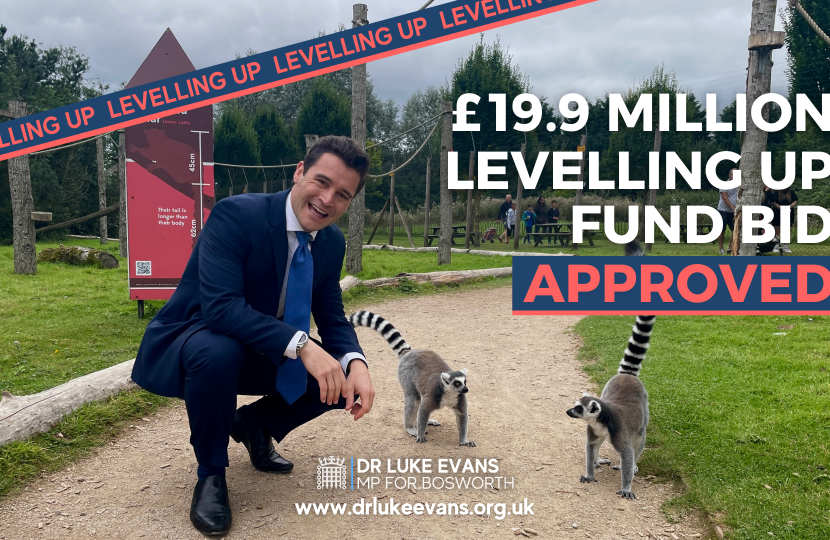 Dr Luke Evans, MP for Bosworth, has welcomed the wide range of opportunities Levelling Up is offering Bosworth, following the release of the Government’s White Paper. The area will benefit from hundreds of millions of pounds of investment in local services, from the chance to negotiate a ‘West Midlands style’ County Deal, to a successful £19.9m Levelling Up Fund bid.

In the Levelling Up White Paper, Secretary of State for Levelling Up, Michael Gove, revealed that County Deals will be offered to 9 more areas in England, with Leicestershire amongst the first to benefit. Formal negotiations on a new county deal will now begin with the Government and the County Council, with the aim to have a deal completed by this Autumn.

Since being elected in 2019, Dr Luke has campaigned with his fellow Leicestershire MPs for fairer funding for our local services, and the opportunity to negotiate a County Deal is a first step in achieving this.

In January 2021, the Bosworth MP highlighted that Leicestershire has historically had one of the lowest funded County Councils in the country, describing how Leicestershire “would receive an extra £374 per resident” if the country “was funded at the same level as London”.

The announcement of a County Deal comes off the back of Twycross Zoo’s successful bid for the Levelling Up Fund, which was formally recommended by the Bosworth MP. As a result, £19.9 million of funding will be invested in a new National Science and Conservation Centre, with a fantastic range of benefits for our local economy, establishing a national and international hub for conservation.

£28 million of investment for superfast broadband in Leicestershire, meanwhile, has also seen 96.4% of Bosworth being able to access superfast broadband – higher than the UK average of 95.0%. Over 300 houses in Sketchley Brook were recently upgraded to superfast broadband, for example, after the entire estate was previously plagued with problems for many years.

Throughout the pandemic, Bosworth also received £29 million in CBIL loans, £3.5 million from the Household Support Grant, £55 million in Bounce Back Loans for 1869 businesses, and 15,000 people supported by the furlough scheme.

It has also been announced that 12,000 employees in Bosworth have now been enrolled into a workplace pension as a result of automatic enrolment introduced by the Government, setting the population up for financial security in later life. Overall, participation in workplace pensions has risen from 42% in 2012, to 86% in 2020, with a 37% increase in the amount saved.

The new White Paper also revealed that in the East Midlands, 841 extra police officers have been recruited since 2019, and that an extra £229 million will be allocated for mainstream schools in 2022-23 – an increase of 6% per pupil. 7880 jobs have been created through the Kickstart scheme, meanwhile, and there are now 831 more doctors, and 1900 more nurses, working in hospitals in the East Midlands in comparison to 2019.

Dr Luke said: “Just over two years ago I was elected on a platform to Level Up Bosworth, and from having the opportunity to negotiate a new County Deal, to many hundreds of millions of pounds of investment in local services and the economy, we truly are being Levelled Up.”

“It was fantastic to see in the Levelling Up White Paper that Leicestershire is right at the top of the Government’s agenda, and will be one of the first counties in England to be offered a new County Deal. We have historically had one of the least funded, but most efficient, County Councils in the country, and the Levelling Up agenda is helping to address this, with real, tangible and palpable benefits for Bosworth."

"The release of the White Paper also builds on the brilliant news last Autumn that our Levelling Up Fund Bid has been successful, which will bring local high skill jobs and a whole range of benefits for the local economy.”