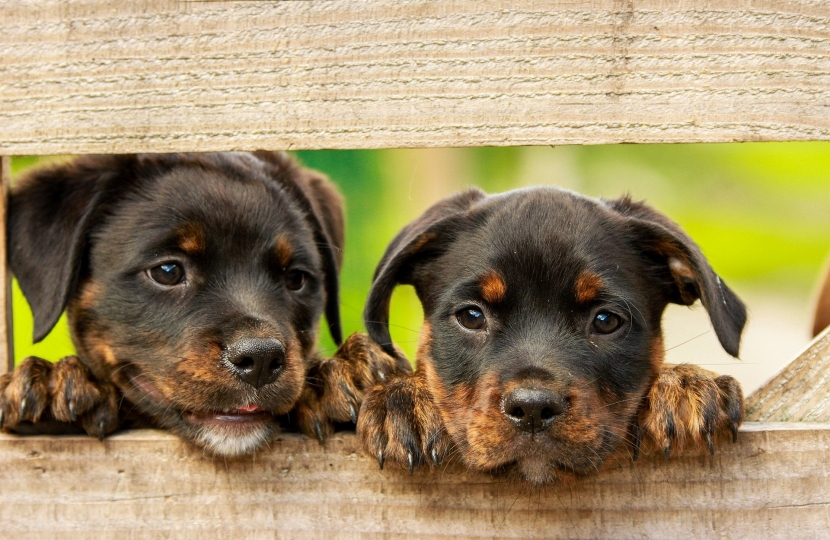 Dr Luke Evans, the Member of Parliament for Bosworth has welcomed the launch of the Pet Theft Taskforce which has been given the job of investigating  the recent reported rise in pet theft since the start of lockdown.

Sales platforms have reported a considerable rise in puppy and kitten prices over the course of the past year following more people deciding to buy or adopt a pet. Recent reports have suggested that this may be leading to a rise in pet thefts.

According to DogsTrust, the price for five of the UK’s most sought after breeds grew significantly during the first lockdown with the price of some breeds rising by as much as 89%. Google searches for ‘buy a puppy’ increased by 166% in the months between March and August following the start of lockdown last year. Recent police investigations into dog theft have also resulted in numerous raids and arrests on suspicion of theft and animal cruelty.

The new taskforce has been set up to gather evidence to understand the factors that may be contributing to any perceived rise in thefts and to recommend any necessary measures to tackle the problem. The Taskforce will learn lessons from successes in tackling other types of theft, such as mobile phone or metal theft, and how to clamp down most effectively on this illegal market and those engaged in it.

Dr Luke said “I have asked questions in the chamber a number of times about pet welfare and Covid related crime. Pet theft has become a great concern for many of my constituents and it’s essential the we robustly assess the evidence to understand the true scale of the problem.”

The Pet Theft Taskforce will:

Environment Secretary George Eustice said: “Pets are much loved members of the family, and these reports will be distressing for all pet owners.

“Pet owners shouldn’t live in fear so we’ve set up this Taskforce to thoroughly investigate the issue and ensure that we have the measures in place to stop these criminals in their tracks.”

Home Secretary Priti Patel said: “Having callous thieves steal a much-loved pet is heart-breaking for families and it is deplorable that criminals seek to profit from this cruel crime.

“We are already taking action to combat such lawlessness by bolstering the police with 20,000 extra officers but this new taskforce will ensure we know how best to combat the driving forces behind this distressing crime and clamp down on the perpetrators.”

The Blue Cross has also published detailed guidance for pet owners on how they can protect their animals from theft.

The taskforce will aim to report on the findings and publish its recommendations in the autumn this year. The full Terms of Reference for the Taskforce can be accessed here.

The plans are part of the Government’s commitment to further strengthening the UK’s position as a global leader in animal welfare standards and come alongside other measures including taking steps to end live animal exports and crack down on the illegal smuggling of dogs and puppies, with further proposals to improve standards and eradicate cruel practices to be set out later this month.

Are you interested in growing your business?
Would you like to find new international customers?
Do you know about the support available to help your business identify and take advantage of exporting opportunities?