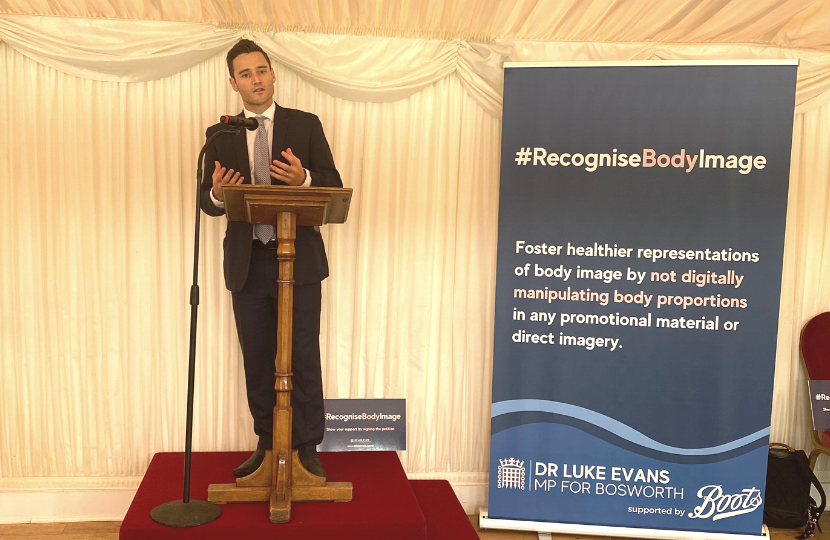 An ongoing campaign by Dr Luke Evans, MP for Bosworth, to place a label on images where body proportions have been digitally manipulated received a significant boost this week as it forms part of the newly announced Women’s Health Strategy.

Thanks to Dr Luke’s continued efforts and campaign to foster healthier representations of body image, the Women’s Health Strategy makes reference to future policy on digitally altered images including mandatory labels when body proportions have been digitally manipulated.

The Women’s Health Strategy, a 10-year plan, is the first of its kind for England and aims to look more holistically at women’s health. The strategy hopes to create a seamless journey for women as they engage with health services throughout their life.

In the document there is an acknowledgement of the issue of body image, stating “The government acknowledges the possible link between digitally altered body images and mental health, including the potential harms such a link may cause. The Government will consider further proposals to tackle body image issues related to digitally altered images, such as mandatory kite marks, as part of the Online Advertising Programme and our future plans for mental health.

“The Government’s priority will be ensuring that any intervention is evidence-based and makes a real and positive difference and will set out its approach in due course.”

This assurance by the government follows news that household-brands such as Marks and Spencer, John Lewis, Dove, Boots and Boohoo Group have signed Dr Luke’s Body Image Pledge. The Pledge is a voluntary commitment which brands, charities and organisations have taken to not digitally alter a person’s body proportions in any advertising or direct imagery.

Dr Luke Evans MP said “This is an issue which affects many people. Men and women, young and old. I’m pleased to see the proposals for a label on images where body proportions have been digitally altered incorporated in the Women’s Health Strategy.

“I believe it is testament to the need for change on this issue that such prominent companies are supporting my campaign. Many of which have been working to their own honest-advertising principles long before I became an MP, but current momentum behind the Body Image Pledge shows that we are stronger when we come together as one.

“By taking this voluntary commitment these organisations have acknowledged the detrimental impact that viewing warped and unrealistic body proportions can have on a person’s mental health and body image. It’s a big step in promoting responsible advertising.

“I urge other brands, charities and organisations to show the same commitment towards fostering healthier representations of body image and sign the Pledge.”