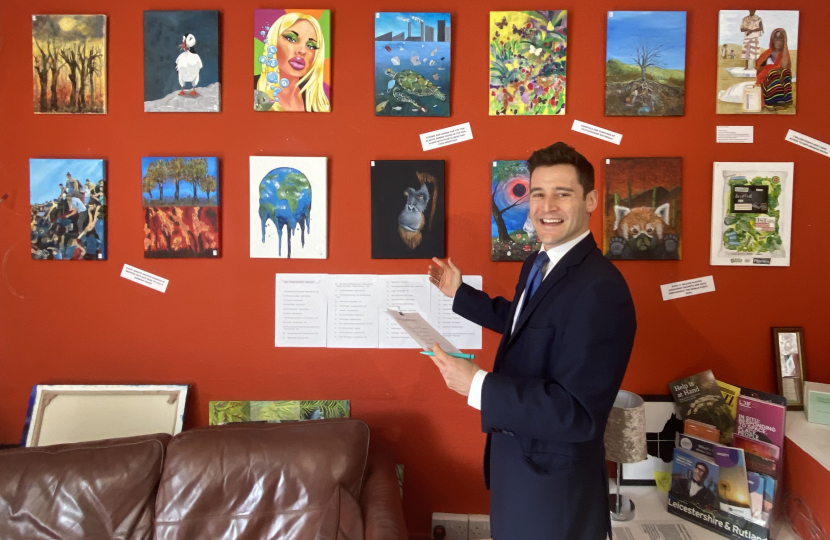 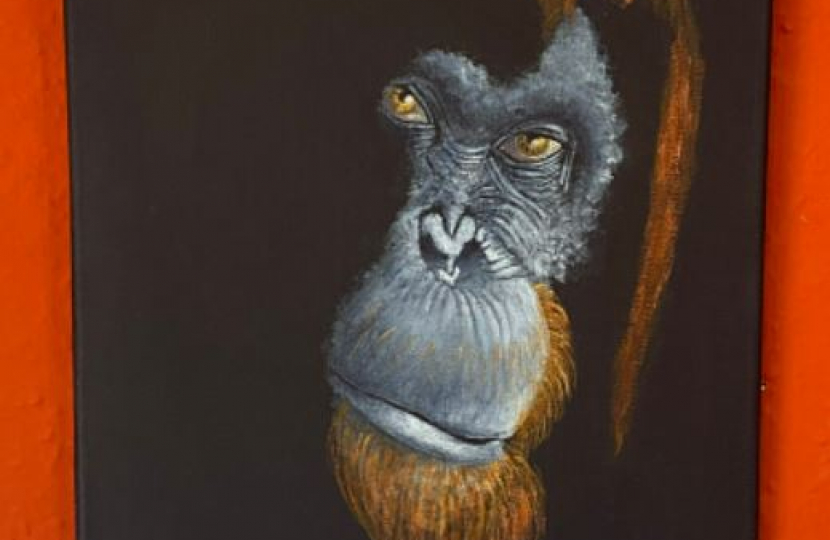 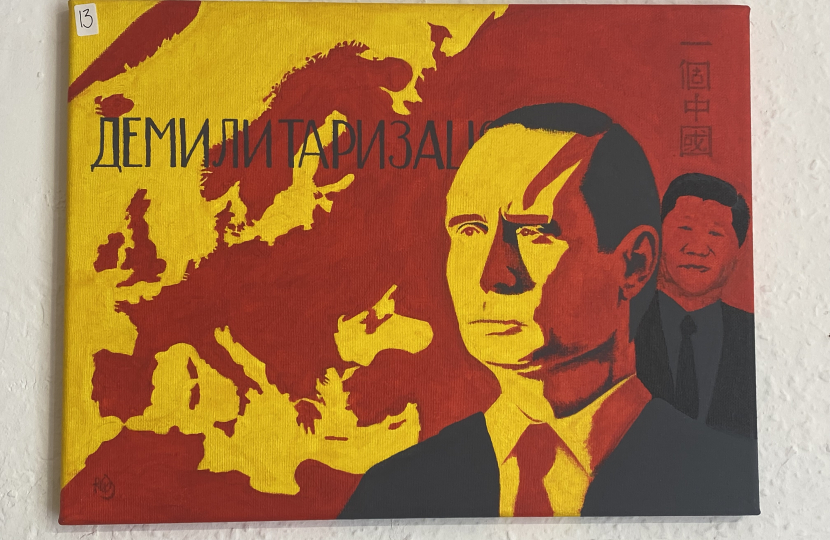 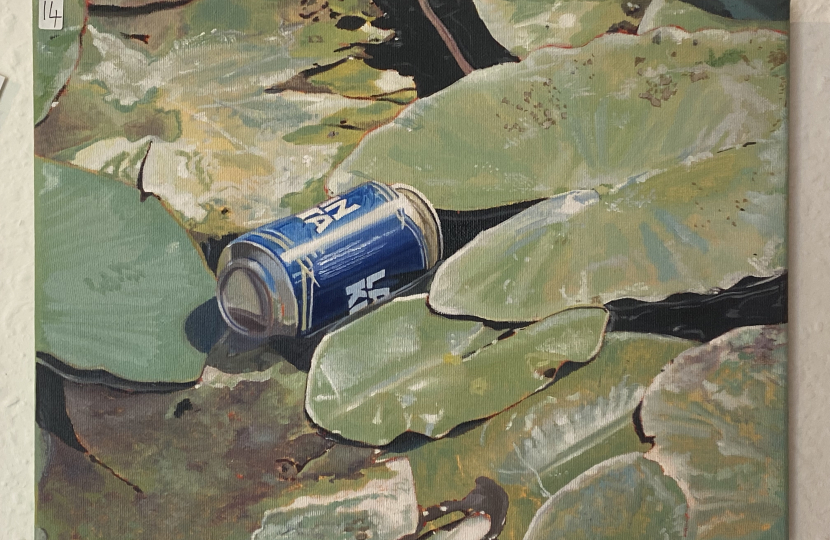 Dr Luke Evans, MP for Bosworth, had the honour of judging the fourth annual exhibition of artwork by students of Ten2 Gallery’s painting classes and submissions from local artists.

There are a total of 48 paintings on show at the Ten2 Art Gallery and Café on Hinckley’s Castle Street, and Dr Luke had the difficult task of choosing just three winners and two paintings to receive honourable mentions.

The name of this year’s exhibition is ‘What I’m concerned about…’ and painters took inspiration on everything from climate change and plastic pollution in our waterways, to the need for ‘perfection’ in social media content and even our vegetables!

Dr Luke chose a painting of the face of an orangutan surrounded by darkness as his overall winner. The painting, called ‘Will you miss me?’ by Clare Freeman, reminded Luke of the primates he saw when travelling around Indonesia. Bosworth’s Member of Parliament said the message is particularly powerful as the species is critically endangered following decades of poaching and deforestation, and that “a solitary face poking through the abyss was extremely provocative.”

Second place was awarded to Richard Danvers whose painting ‘A New World Order’ sees European, Arctic and Mediterranean nations in red while Presidents Vladimir Putin and Xi Jinping look on. The theme for the exhibition was announced before Putin invaded Ukraine, but a few artists turned their focus after the war began. Dr Luke selected this painting as he said “the message was executed in such a strong manner, and poignant give the current state of geopolitics.”

Dr Luke selected a take on Monet’s famous Water Lilies collection as the third winner. Fern and Evie Beasley painted a floating can amongst the lily pads, reflecting the waste that is sometimes left as litter around the country’s waterways. The MP was drawn to this piece as he commented on it being “a very clever take on the classic collection.”

Honourable mentions were given to two pieces which reflect the work Dr Luke is doing on body image. ‘Trout Pout’ depicts a woman whose facial features have been enhanced, alongside the logos of social media platforms. ‘Does it matter if we are not perfect, we are all the same underneath’ shows a carrot standing tall above a plethora of slightly odd-shaped carrots – reminiscent of what supermarkets may sell as ‘wonky’ because they don’t conform to usual vegetable aesthetics – which lie discarded because of their appearance. 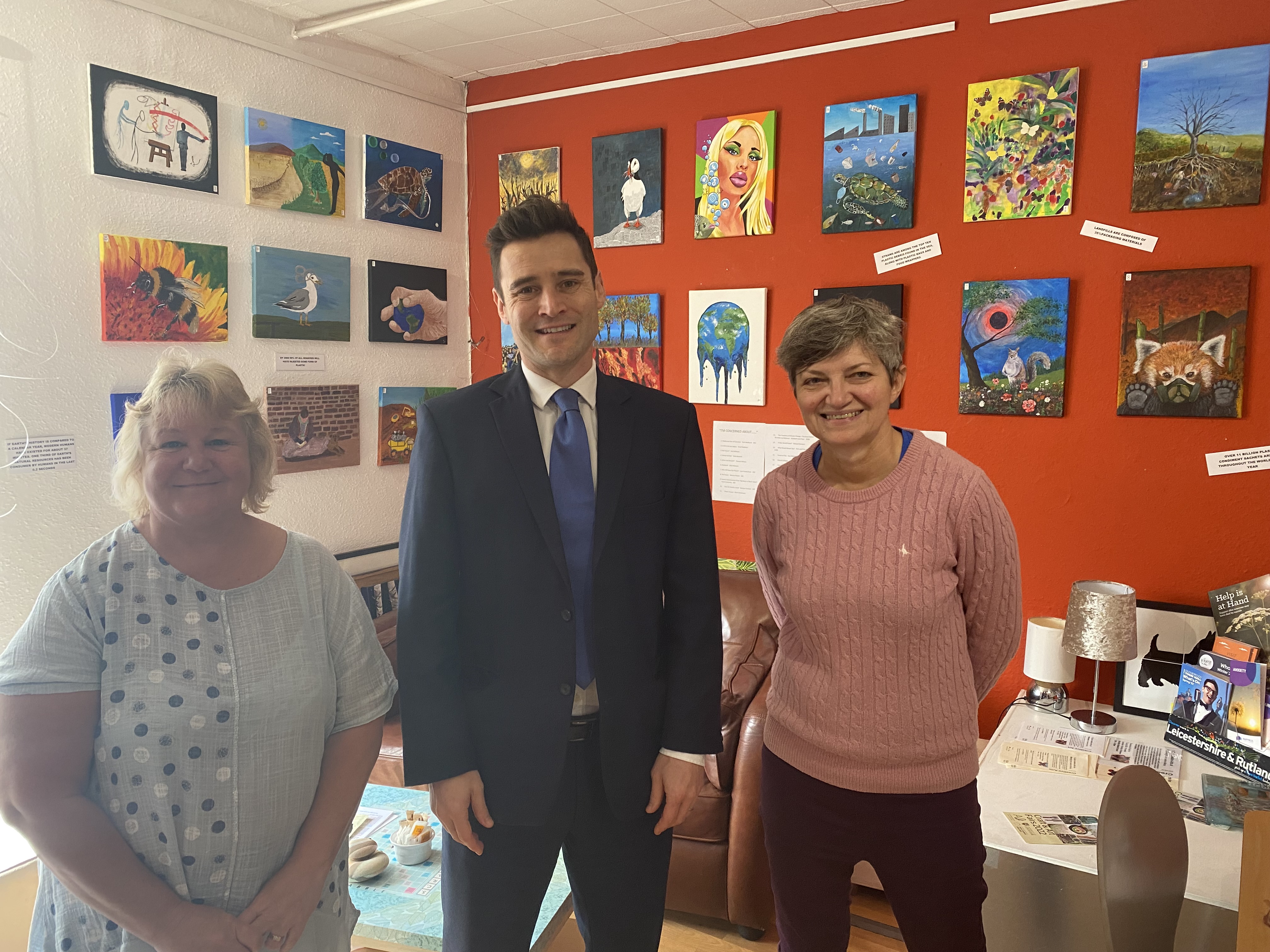 [(L-R) Linda Flower, Dr Luke Evans MP and Rose Wilkinson in front of some of the paintings]

Dr Luke Evans MP said “This was such a hard choice as, and I know it sounds clichéd, each piece is noteworthy and commendable in its own right. I chose the winners because I connected with them on first sight and found the paintings to be so skilfully done.

“Everyone who took the time to research and paint their idea, as well as being brave enough to allow it to be hung on the wall and judged, has my respect. I look forward to seeing more artwork from everyone in the future!”

Rose Wilkinson, owner of Ten2 Gallery, said “A lot of students are just starting their artistic journeys and it’s a real confidence boost, not only to see their work on the walls and have them admired by the public, but to be selected as someone’s favourite. The theme this year is very poignant and has really made us all think about what we are doing to the world, which was exactly our reason for choosing it.”