A response to constituent emails about food, environment and agriculture issues

Thank you for your recent emails about food and environmental issues as well as the future of British Agriculture.

As you may suspect, I have received a large amount of correspondence on this area of policy including many ‘campaign’ emails using pro forma text. These emails raise a range of issues including the Agriculture Bill (recently voted on in Parliament,) US and UK trade negotiations about food, the need for an independent Food Standards Commission, Chlorinated Chicken and Hormone Fed Beef in British Markets and the Environment Bill. All these issues are very important, but due to the sheer number of emails, I cannot provide bespoke responses to everyone in every circumstance so please forgive me. If you have a specific point, please to let me know by response and I will do my best to answer it for you. Thank you so much for your understanding.

I start from a belief that British consumers want high welfare produce, and if our trading partners want to break into the UK market, they should expect to meet those standards. The manifesto I stood on was clear that in all trade negotiations, our high environmental protection, animal welfare and food standards will not be compromised. Furthermore, the EU Withdrawal Act will transfer all existing EU food safety provisions, including existing import requirements, onto the UK statute book. That means the Government must stand firm in trade negotiations, so any deals live up to the values of our farmers and consumers. From the dealings that I have had with Ministers, this approach is being vigorously pursued.

The remaining stages of the Agriculture Bill took place in the Chamber on 13 May and  in advance of the vote last week, I considered the representations made in the campaign emails about the Agriculture Bill, but also individual farmers from the constituency who personally wrote to me expressing their concerns and opinions. I also spoke to several parliamentary colleagues at length about the issue of food standards, including a fellow Leicestershire MP who sat on the Bill Committee. I also read the NFU briefs and other external articles.

There were several amendments proposed as part of the debate and the Government was concerned to ensure the avoidance of:

I have written to the Secretary of State for Environment, Food and Rural Affairs to draw on various points that have been raised in Bosworth especially from our local farmers. It is a unique selling point for the UK’s farmers, whose high-quality produce is in demand around the world, but I also want to ensure that the Bill allows British farming have more freedom to operate in a way that may have not been the case previously.

US and UK Trade Deals

For the last month or so, the UK has been in negotiations with the US about a future trade deal and I understand that this process is extremely emotive for a number of different reasons. As I have already suggested in this letter, I have been advised by Ministers that during trade negotiations, the Government will not compromise on our high environmental protection, animal welfare and food safety standards built up over many years having the trust of the public and the world. I have been involved in conference calls with the Secretary of State for Trade and the UK’s lead negotiator about this matter and the Government’s stance was reiterated during the conversation. Food standards are not up for negotiation as part of these negotiations.

Prices for premium products tend to be higher in the US, so improved access will allow UK farmers to obtain high prices for their quality produce. The US has relatively high costs of production compared to the UK. As an example, US beef is currently 6 per cent more expensive than EU beef. So opening the vast US market could help boost UK farmers’ incomes and reduce their input costs, making them more competitive, more productive, and more profitable. However, I am advised that the Government will not adjust those standards to secure a trade deal.  The standards will be based on science and decided by the UK alone.

I agree with many constituents who have highlighted how the Covid pandemic has caused many of us to reflect on where our food comes from and the uncertainty of the pandemic, coupled with trade negotiations and the vagaries of the global food market have created uncertainty which is evident in the correspondence that I have received. However, the UK already has the Food Standards Agency, and Food Standards Scotland which are independent agencies assessing the UK’s food standards for both domestic production and imports. These agencies will continue their important work to ensure all food imports comply with the UK’s high safety standards.

The capacity of the FSA is being strengthened going forward. The FSA’s Science, Evidence and Research Directorate now stands at over 100 scientific posts of which 50 are in the FSA Risk Assessment Unit; a doubling in size since 2017. The Agency will take over the functions carried out by the European Food Safety Authority (EFSA) and the European Commission especially in the assessment of particular food products or product preparations. Improvements have also been made to surveillance arrangements to use a variety of data and modern predictive analytics tools to identify and evaluate food risks in imported food. This approach will allow the Agency to target sampling and analysis where it is most needed.

I know that many constituents have raised concerned about the possibility of chlorinated chicken and hormone fed beef entering British markets. I have heard from Ministers that at the end of the transition period the Withdrawal Act will convert all EU standards into domestic law. These include a ban on using artificial growth hormones in both domestic and imported products. Nothing apart from potable water may be used to clean chicken carcasses but subjects such as these could be considered by the FSA, and the FSA would publish their risk assessments and its risk management advice to Ministers who would decide whether to accept this advice. If any change to existing regulations or authorisation was proposed, statutory instruments would then have to be laid in Parliament to change current rules.

I know that many constituents have taken comfort from our green spaces to cope with the stresses of lockdown and this comfort may have been the prompt for a large amount of you to raise concerns about the Government’s work in this field and I understand Ministers are currently reflecting on concerns about the Bill raised during Committee Stage, as well as those raised by colleagues and interested parties. I look forward to the Bill coming back to the House, at which point I will have the opportunity to vote on any amendments brought forward there.

The Government states that as set out in the 25 Year Plan to Improve the Environment, the decision to leave the European Union has created an historic opportunity to deliver a Green Brexit, where environmental standards are not only maintained but enhanced. I am pleased that the Bill will ensure the environment is at the heart of all policy making and that this and future governments are held to account if they fail to uphold their environmental duties. These will include meeting net-zero by 2050, as well as wider long-term legally binding targets on biodiversity, air quality, water, and resource and waste efficiency which will be established under the Bill.

The Office for Environmental Protection, a new, world-leading independent regulator, will be established in statute to scrutinise environmental policy and law, investigate complaints and take enforcement action when necessary. This will ensure we succeed in leaving the environment in a better condition than we found it. The Government’s 25 Year Environment Plan will also be placed on a statutory footing, and a set of environmental principles will be introduced that will be used to guide future government policy making.

In the 25 Year Environment Plan, the Government committed to developing a Nature Recovery Network and, in the long term, to create or restore 500,000 hectares of wildlife-rich habitat outside the protected site series. A new framework for Local Nature Recovery Strategies will be legislated for in the Environment Bill, to help support the Nature Recovery Network and better direct investment in the environment and green infrastructure – creating places that are richer in wildlife and provide wider benefits for local communities. The Bill will also require the preparation and publication of Local Nature Recovery Strategies, mapping nature-rich habitats, so that investment can be targeted where it will make the most difference. These local plans will embrace local knowledge to strengthen links between neighbouring communities and support the wider Network.

I have been aware that the Government was reflecting on concerns about the Bill raised during Committee Stage, as well as those raised by colleagues and interested parties. I look forward to the Bill coming back to the House, at which point I will have the opportunity to vote on any amendments brought forward there. However, with Covid 19 related issues dominating the parliamentary agenda, I am unsure when that debate will take place.

I will continue to follow these debates closely and I am pleased that the Government are already engaging with the agricultural sector as part of its trade discussions, including the National Farmers Union.  I will continue to our local farmers in my constituency to ensure their views are fed to Government departments such as DEFRA and DIT but from listening to Ministerial statements, I am assured that Ministers share my determination to ensure our future trade agreements will deliver benefits for our brilliant farmers and food producers. 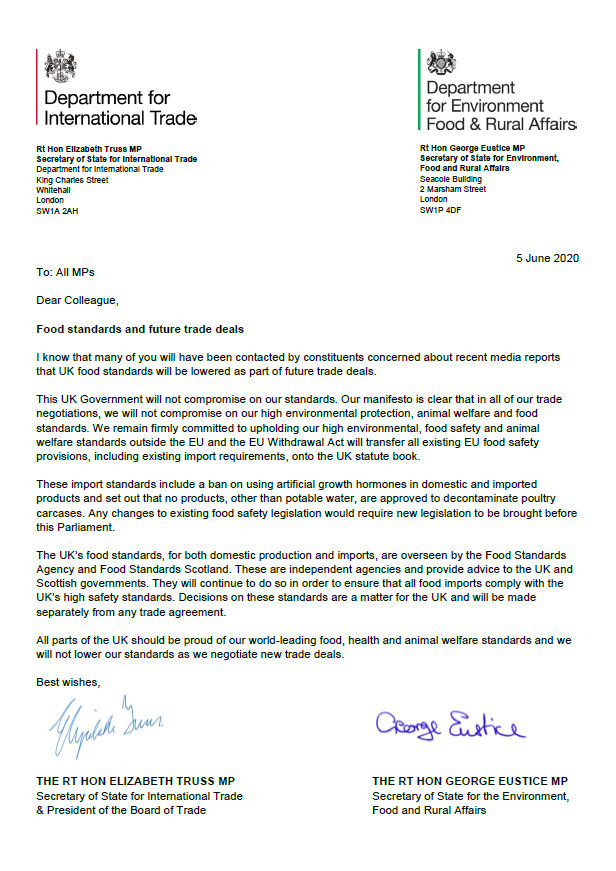